The ACS Triennial Reunion is for anyone who ever attended ACS as a student or was a member of the faculty or staff. You are part of the alumni even if you did not graduate! Each reunion is a 3-day social gathering and networking opportunity.

Since 1982, alumni of ACS have been gathering every three years in ever-larger numbers to reconnect and celebrate their years at ACS.

Most people who attended ACS prior to 1980 were American expatriates, the children of parents who worked for overseas companies, or missionaries, or diplomats. Many of them lived in the B.D. – the Boarding Department – which closed after the Lebanese Civil War began. People who had spent 24 hours a day 7 days a week with their fellow students were eager to locate and connect with their friends from those days, most of whom had scattered around the world after leaving ACS.

Since nearly all alumni prior to 1990 were living in the U.S., the new Alumni Association decided to host reunions around the country: east, west, central. Since ACS classes were small, AA decided that anyone who ever attended ACS was welcome to the reunions, which typically attract 250-300 alumni plus their guests.

Now that the majority of living alumni come from the post-Civil-War years, the AA is revisiting the concept of where and how often all-school reunions should be held. We’d love your input and are always open to new ideas. 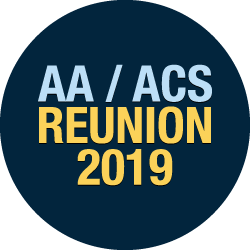